Summer is over. The children have started school again and work routines have resumed. A spell of freezing weather made it easier to accept the end of holidays. But some warm and sunny days have made a come back, giving us the opportunity to finish off the last bottles of rosé that didn’t get drunk during the summer break. This is certainly true in my case: I am a weather optimist. I stock up the summer house in the archipelago with plenty of refreshing whites and rosés to find that there are not enough opportunities to drink them. Swedish summers are unpredictable. They can be nice and warm, but they are not long lasting. The evenings where one can comfortably sit outside are few. Once the sun has set, life on the terrace is spent wrapped up in a blanket or a down jacket fighting mosquitoes. Those are not conditions that prompt me to choose rosé, but the pink wine can be a useful psychological prop. If rosé exists mainly to refresh and quench the thirst from summer heat, we can happily sip it under just that pretence, enjoy virtual heat and imagine the sound of crickets.

As the waning wasps dance aimlessly around, I shall be tempting friends with the last of my summer wine. I am not sure how much of it will get drunk. According to the Swedish National Food Agency (www.livsmedelsverket.se), summer is the period of year in Sweden when the consumption of wine and spirits is at its highest. As school and work routines set in so do sporting activities and healthy eating habits. The positive aspects of wine are quickly forgotten and consumption levels of alcohol fall. The current mood is on maintaining the holiday glow and cutting back on excesses. Media coverage of food and wine in early September was focusing on the highly calorific content of wine and on the negative impact of alcohol on sports training. In mid-September Dagens Nyheter’s wine writer was still following in the same vein by giving tips in the week-end supplement on how to make an opened bottle of wine last longer. A message to not finish an entire bottle in one sitting… 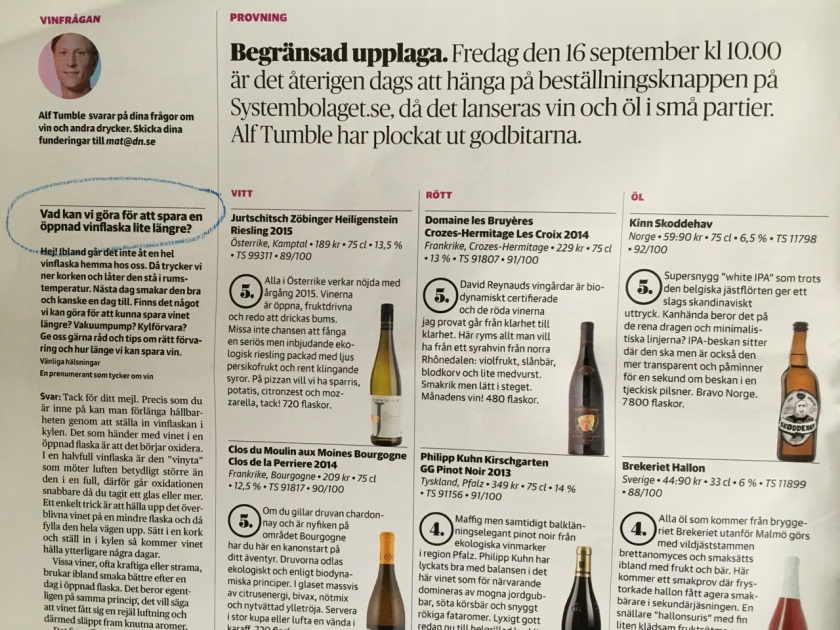 Wine and oxidation: DN’s Alf Tumble giving advice on how to store an opened bottle of wine

But what does a glass of wine contain and is it really all that bad for you?

In effect it is a minor percentage of the total content that can create drunkenness and potential ill health. It is an even smaller percentage that sets one wine out from another through its colour, texture, odour and taste. All these elements play their part and work in symbiosis. They cannot be dissociated from the whole. Alcohol gives body and texture to the wine and it enhances many of the sensory perceptions. In addition, alcohol is highly calorific.

Drinkaware (www.drinkaware.co.uk) states that a 175 ml glass of red or white wine at 13% abv could contain up to 160 calories which is equivalent to a slice of madeira cake. The Swedish National Food Agency calculates that a 150 ml glass of dry white wine and dry red wine at 12% abv contain 101 and 73 calories respectively – a somewhat lower estimation than British Drinkaware. In Scandinavian terms the glass of white wine would be equivalent to a small portion of pickled herrings. Wine Folly (www.winefolly.com) has a clever formula for counting the calories of alcohol in wine which is to multiply the amount of wine in millilitre by the alcoholic percentage, then multiply again by 7. In addition to the calories from the alcohol, there are those from sugar in wine such as in the case of champagne, fortified, late harvested wine etc… but likewise in dry white wine which can often have residual sugar to mask an unpalatable acidity, bitterness or an inherent poor quality.

If one solely looks at the calorific content, then wine does indeed compare badly with a sugary fizzy drink (150 ml = 64 cal, Swedish National Food Agency). Wine does not, however, stifle the appetite like a sugary beverage, nor does it fill you up and need digesting like a slice of madeira cake. Moreover it usually makes food taste better. What other reasons are there for drinking wine with food? And what about the beneficial effects of wine? I turned to Ronald Jackson’s book Wine Science and found the following answers stated in the paragraph below.

Wine taken in moderation with food increases saliva and gets the gastric juices going, thus promoting digestion. When enjoyed with a gastronomic meal it helps us to regulate our food consumption, making us eat more slowly and realise when we are about to reach satiety. Wine also has an antibiotic effect on Helicobacterium pylori, one of the main causes of stomach ulcers. Furthermore, studies have shown that a moderate consumption of alcohol reduces the rate of death caused by cardiovascular disease by 30-35%. Hypertension, heart attacks, strokes and peripheral arterial disease are all reduced, as are kidney stones, with a regular moderate consumption of alcohol. A diuretic and muscle relaxant, wine can help with arthritis by limiting water retention and reducing joint swelling. It has microbial properties, known since Roman time when wine or vinegar was added to soldiers’ water to fight dysentery (Jackson, 2008). 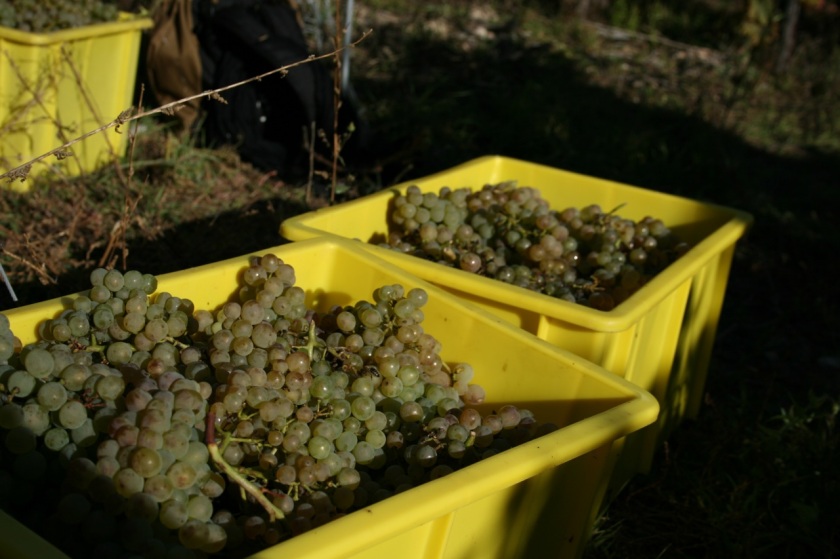 The phenolics are mainly in the skins, seeds and stems of the grapes but some are in the juice and pulp

The major components in wine that are responsible for the above-mentioned health benefits are the alcohol itself as well as the phenolic compounds. The latter are in the skins, seeds and stems and extracted during fermentation, though a small percentage is present in the juice and pulp. The compounds have antioxidant properties. They preserve wine by protecting it from oxidation. Antioxidants act in a similar way in the human body. Vitamin E and C are both important antioxidants found in some of our foodstuff. Wine does not contain those vitamins but it has potent antioxidants such as resveratrol (also found in blueberries) and such as the flavonoids quercetin and catechin. Antioxidants are thought to lessen the occurrence of neurological diseases, notably Alzheimer, and are beneficial in the prevention of cardiovascular disease. Generally red wine contains greater levels of antioxidants than white wines as white wine is pressed and then fermented off the skins. Various factors impact on the concentration of phenolics, such as grape variety, vintage and winemaking. White wine made from the maceration of grapes on the skin will show an increased concentration in phenolics. Caffeic and coumaric acids, however, are two phenolics that are common in white wine and that are potent antioxidants (Jackson, 2008, p. 694).

White wine has its good sides too

It is understood that any health benefit is only obtained if wine or alcohol is consumed moderately and in conjunction with food.

I spoke to Sven Wåhlin, chief physician at Riddargatan 1, Mottagningen för Alkohol och Hälsa, a surgery for patients suffering from alcohol related problems. He of course mentioned the devastating effects of alcohol on the body and brain when consumed in excess. I asked him what he thought of a moderate daily consumption of wine and whether it was a good thing to give the body a rest and be abstinent a few days during the week. He was of the opinion that with regular drinking the villi (from Latin “shaggy hair”), which line the small intestine and whose task it is to transport nutrients into the bloodstream, get damaged. As a result vitamins and nutrients that the body needs do not get absorbed. I also asked him whether one could really put the calories in wine on a par with those say of a slice of cake. His answer to that was that the body does not respond in the same way to cake as it does to wine. Alcohol activates stress, it heightens the body’s base metabolic rate and makes it burn more calories.

So the golden rule is everything in moderation. In January 2016 the UK government issued revised guidelines on alcohol consumption and set lower upper limits than what it previously advised. These have been provoking some controversy and are amongst the lowest in the world for men (theguardian.com). The current recommendations are a weekly maximum for both men and women of 14 units. This corresponds to six 175 ml glasses of  13% wine a week – which incidentally is lower than the recommendations in Sweden where there is a state monopoly on alcohol.

When you see a 175 ml glass of wine on the table in front of you it is hard to believe that six of them are the limit, yet 175 ml is a big glass. Not that long ago a standard wine glass had a capacity of 100 ml. Today wine glassware has drastically increased in size and so have the servings. A standard pour in a restaurant is 175 ml but 250 ml is often also on offer. Every extra glass of wine ordered at the wine bar is a multiple of 175 ml. You order two glasses of wine and you are not far off a half bottle of wine.

Would it not be a good idea to make wine glasses with smaller bowls the norm in wine bars and restaurants? Wine glasses for a 100 ml pour? If 100 ml were the standard amount for a glass of wine instead of 175 ml, this would change consumers’ perception on what is a reasonable amount of wine to drink. They could then not just stick to one glass but could order two glasses with their food – from a psychological standpoint, two smaller glasses are more satisfying than one big one – and were they to have two such 100 ml glasses of wine everyday of the week, they would be over the British limit but within the recommended limits of alcohol consumption in Sweden. To fall within the British guidelines they would need to be abstinent for two days during the week. But maybe, as Dr Sven Wåhlin pointed out, that would be no such bad thing.

To find out more about the effects of alcohol on health
http://www.drinkaware.co.uk